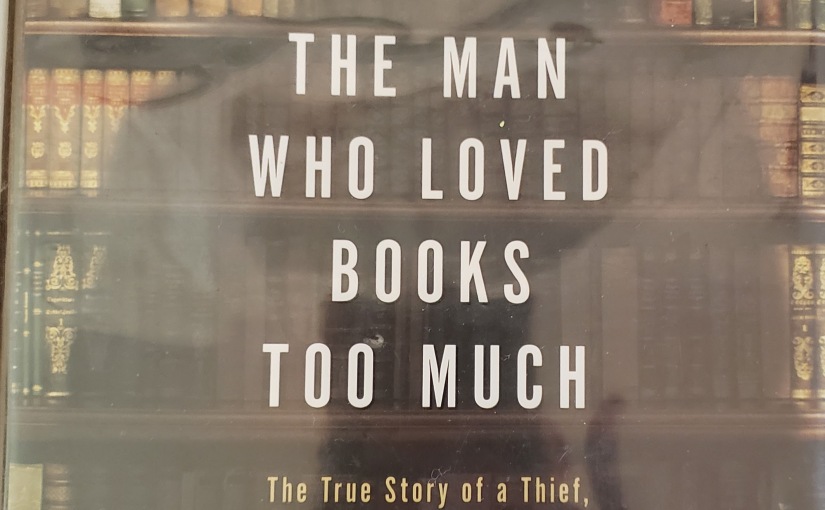 The True Story of a Thief, a Detective, and a World of Literary Obsession

I like the way Bartlett sets up the story. She speaks directly to her audience and first describes what made her interested in tracking a rare books thief. It sounds almost like she is setting up a master’s thesis; she first states her driving curiosity and why which sets us on a journey together. The language is straightforward yet sometimes repetitive. She narrows in on a notorious rare book thief named John Gilkey whom she interviews multiple times. She gets to know him and tries to figure out his motivations. I did not feel the need to summarize every chapter, but there were some quotes and reflections on the love of books themselves which I really enjoyed. What follows are the quotes and reflections Bartlett used that captured my attention. If you are a book fanatic, you will enjoy this read. Numbers at the beginning of an entry indicate the chapter followed by the chapter title. My own reflections I will place in brackets.

[Dude! You are not going to believe this!]:

From Anathema in a medieval manuscript from the Monastery of San Pedro in Barcelona:

For him that stealeth, or borroweth and returneth not, this book from its owner…let him be struck with palsy, & all his members belated…Let bookworms gnaw his entrails in token of the Worm that dieth not, & when at last he goeth to his final punishment, let the flames of Hell consume him forever.

I have known men to hazard their fortunes, go long journeys halfway about the world, forget friendships, even lie, cheat, and steal, all for the gain of a book.

[The book begins with a story of a borrowed book: the Krautterbuch. Referring to the book, Bartlett writes]:

My favorite remedy, though, is for low spirits. “Often we are missing the right kind of happiness, and if we don’t have any wine yet, we will be very content when we do get wine” (4).

Introduction of the Krautterbuch, a book from the 1600s which was supposedly stolen from a library. The author speaks in first person and explains how this book set her on a journey.]

[This passage brought a tear to my eye because it so accurately describes the magic of becoming attached to a book.]

Walking by a booth with an impressive selection of dust jacket art, I heard a dealer say to a passerby, “don’t judge a book by its content!” I had read enough about book collectors before the fair to get the joke: Many collectors don’t actually read their books. At first, I was surprised, but having given it some thought, it’s not so shocking. After all, much of the fondness avid readers, and certainly collectors, have for their books is related to the books’ physical bodies. As much as they are vessels for stories (and poetry, reference information, etc.), books are historical artifacts and repositories for memories–we like to recall who gave books to us, where we were when we read them, how old we were, and so on.

For me, the most important book-as-object from my childhood is Charlotte’s Web, the first book I mail-ordered after joining a book club. I still remember my thrill at seeing the mailman show up with it at our front door on a sunny Saturday morning. It has a crisp paper jacket, unlike the plastic-covered library books I was used to, and the way the pages parted, I could tell I was the first to open it. For several days I lived in Wilbur’s world, and the only thing as sad as Charlotte’s death, maybe even sadder, was that I had come to the end of the book. I valued that half-dream state of being lost in a book so much that I limited the number of pages I let myself read each day in order to put off the inevitable end, my banishment from that world. I still do this. It doesn’t make sense, though, because the pleasure of that world does not really end for good. You can always start over on page one–and you can remember. Whenever I have spotted my old Charlotte’s Web (on my son’s shelf, then my daughter’s), I have recalled how it came to me. It’s a personal record of one chapter of my life, just as other chapters have other books I associate with them. The pattern continues; my daughter returned from camp last summer with her copy of Motherless Brooklyn in a state approaching ruin. She told me she’s dropped it into a creek, but couldn’t bear to leave it behind, even after she’d finished it. This book’s body is inextricably linked to her experience of reading it. I hope that she continues to hold on to it, because as long as she does, its wavy, expanded pages will remind her of the hot day she read it with her feet in the water–and of the fourteen-year-old she was at the time. A book is much more than a delivery vehicle for its contents, and from my perspective, this fair was a concentrated celebration of that fact.

[The author is most interested in the type of book thief that steals for the love of books. Gilkey is notorious. He says he will tell his story from prison.]

[The author’s first interview with Gilkey.]

[Gilkey sees his book collection as a representation of himself. He wants to appear rich and cultured. He wants people to be impressed.]

In 1644, John Milton wrote: “For books are not absolutely dead things, but do contain a potency of life in them to be as active as that soul whose progeny they are; nay they do preserve as in a vial the purest efficacy and extraction of that living intellect that bred them.”

11  This Call May Be Recorded or Monitored

Of having taken their lives, he said, “Every man must die, sooner or later, but good books must be conserved.”

This book belongs to none but me

For there’s my name inside to see.

To steal this book, if you should try,

It’s by the throat that you’ll hang high.

And ravens then will gather ‘bout

To find your eyes and pull them out.

And when you’re screaming

Remember, you deserved this woe.

[Man, these medieval book lovers were not playing.]