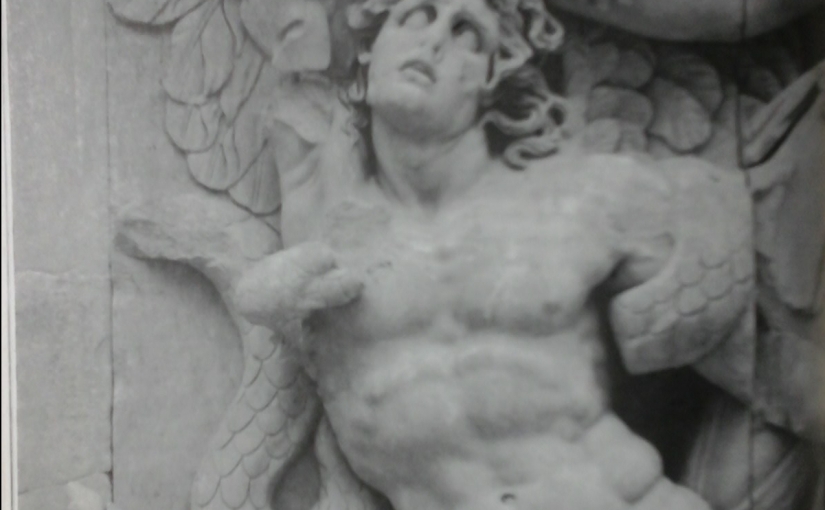 Cosmogonies are stories about how the world began. To compose a “cosmogony” is to describe how the world came to be a beautiful and well-ordered place. Early cosmogonies provide mythical stories and divine personifications instead of scientific theories. The continuity of mythical elements across the Babylonian, Greek, and Roman cultures (i.e. divine creation/floods) seems to indicate a common heritage among the ancient Mediterranean world. Ancient cosmogonies do not usually begin with creation ex nihilo (from nothing), but present some primeval matter from which the world took shape. These works also trace the ways human life has changed since it began. Ideas of decline and progress are essential to the way humans imagine themselves and their place in the world.
A whole world is a relatively new idea. Early people always pictured themselves at the center of the world and tried to imagine what was above and below. These text often feature stories of primeval struggle between different generations of the gods: a “theomachy” (battle of the gods). This kind of story can display triumph of male power over an earlier time (matriarchal); as a prototype for how successful human rulers can replace warring factions or oligarchies; or as a mirror of the usual struggles in human families where the younger generation takes control. Creation stories may also help establish the centrality of a particular place or culture within the whole world.
Cosmogonies tend to classify the world in a hierarchical structure. The terms in which people imagined creation, and the gods, varied with the landscape. Sun, sky and water are sometimes viewed as the sources of life. Poetic accounts of cosmogony played an important part in literature throughout antiquity; they are not confined to the distant past. From the beginning, composing stories about cosmic creation was intimately related to thinking about human acts of creation. Creation stories are meditations on the act of making, and we should remember that the Greek word for poetry, poesis, primarily means “making.” Often some of the most self-aware works of literature, these stories raise questions about how human and divine agency relate to one another when we make up worlds of the mind.